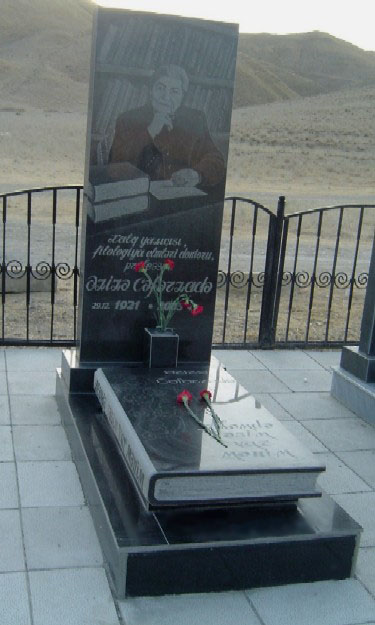 Outstanding researcher, philologist, folklorist, writer and professor, Aziza Jafarzade was one of those wonderful "aghbirchaks" (female community elders) who we had been interviewing to feature in our magazine. Since Summer 2002, Azerbaijan International's staff had visited her five times to tap into her vast reservoir of folklore and historical knowledge. Regrettably, our sessions were always so short. After about an hour, she would apologize, "Can you come back sometime; I'm tired now." She was ill those days.

We had come to love Aziza (whose name in Arabic means "dear" or "beloved"). It was a great disappointment that she passed away before we were able to publish her work, but she was aware that with the help of her son Turan Ibrahimov who now lives in Alaska, we had succeeded in making three of her recently published books in Azeri Latin available for download on our Web site. She was the first Azerbaijani author that we had ever worked with to put her full-length books in compressed PDF format on the Web. Several of her short stories are also available, some in English translation.

Aziza was blessed with a rich folklore heritage that she had learned from her mother and stepmother. Rather than dismiss these traditional roots, she combined them brilliantly with an academic career. From 1956 to 1974, Aziza headed the Department of Manuscripts of the Academy of Sciences. Her doctoral dissertation in 1970 was "The Folk Style of 19th century Azerbaijani Poetry". Since 1974, she had taught at Azerbaijan State University, lecturing on 19th century Azerbaijani literature.

Her youth was clouded by tragedy. In the 1940s, her youngest brother was exiled after writing a critical poem about the Communist system. He was quite young at the time, only 15-16 years old. Exiled for eight years, he was released only after Stalin's death in 1953. Aziza told us, "You need not have committed a crime to have been arrested. It was enough that you were an intellectual. Azerbaijanis have a proverb: 'Kill the cat to scare the bride'. That's what they did, killed some to scare others." Her brother later went on to describe those years in exile in his memoirs, "The Enemy of the Nation" which is included in the book "We, The Jafarzades".

According to her own count, Aziza had published 15 scientific research books and about 40 literary works. Her first short story, "Angel of Death" was published in the newspaper Adabiyyat (Literature) in 1937 at the height of Stalin's repression. She was 16 at the time.

Her articles were so numerous she couldn't remember how many she had written. "I've simply put them in a folder and named it, 'My Mother Said That...' and asked my son to publish them as a collection 'after I change my world'", she told us. Turan is also hoping to publish some of her diaries and the materials that she had prepared for radio and TV programs as well. Aziza was a gifted storyteller. Her short stories didn't always turn out "happily ever after", but they always revealed human universals that made life worth living. In a quiet, calm voice, she implores you to listen, lest you miss some ancient nugget of wisdom. [See her short story entitled, "Stone Boy" ].

When we asked Aziza to name her favorite work, she replied: "If you cut one of my fingers, it will hurt. They are all my works. I can't say which one is my favorite. Two things I was never able to do: I never knew how much salary I really deserved, nor how to estimate the value of my work. It always seemed something compelled me to write; I so desperately wanted my students to know and appreciate their heritage."

The work which brought her the most recognition was: "I Have My Voice All Over the World". It was the first book in a trilogy, which discusses the literary life of 19th century poet Seyid Azim Shirvani. The second work, "Return the Motherland" is about 17th century Nishat Shirvani; and the third, "Remember Me," describes the literary friendship between the great satiric poet Sabir and the romantic poet Abbas Sahhat. All three historical novels were written between 1971-1978.

Her other major works include: "Baku-1501", "The Mountain Hun", "Trouble", and "Tahira Zarintaj". She had just finished her last work - a historical novel about the poet Fuzuli, before she died. 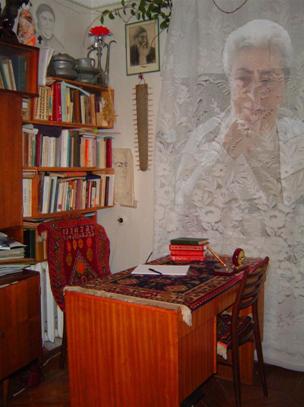 Aziza was interested in women's lives and did her best to show the strength and contribution that they have made to the preservation of the cultural heritage and national identity. It was Aziza who initiated the study and popularization of the literary heritage of women poets and ashigs in Azerbaijan. She was the one who went out to the villages and documented their folk songs and formed the Ashig Pari Ensemble, which is still popular with TV audiences.

Aziza was convinced that Azerbaijan's true history is contained in its folklore. "For the past 200-300 years, Russia has tried so desperately to change our history and to separate us from the Turkish world. Our bayatis contain our whole history. Azerbaijani folklore is very rich and the truth is: most of it has been created by mothers." She was convinced that without women, the Azerbaijani nation would have disappeared.

Despite her lingering illness those last years, Aziza remained active and had just finished another historical novel about Fuzuli shortly before she died. She told us: "For me to live is to be active. If I write, that means that I'm alive. Life isn't a faucet that you can close when you want to. I have to live this life and give back this inspiration that God gave me to my nation. I don't want to pass with any of it left within me."

Aziza Jafarzade was born December 19, 1921 in Baku and passed away on September 3, 2003, when she was nearly 82. She was buried beside the graves of her parents, her husband and brothers in the village of Taghli, a village in Shamakhi region, according to the instructions in her will.

"Oh, my wishes, dreams,
Even if I die and am buried beneath the ground,
Never think I will forget you."